Emergence in Quantum Phases of Matter

We are using solid state materials with magnetic degrees of freedom to explore the topic of emergence.   How does frustration (i.e. the competition between electronic interactions) in combination with quantum effects, generate new effective interactions?   What are the fundamental excitations of the new quantum ground states that emerge?  Can lattice disorder produce new types of emergent excitations? Some known examples are spinons in spin liquids (“half of an electron” that carries spin but no charge), magnetic monopoles in spin ice, or the theoretically predicted anyons arising from Kitaev spin liquids.   We are exploring materials to find excitations like these.  Neutron scattering is a fantastic probe of these excitations, with the ability to cover the full Brillouin zone as well as having access to a large dynamic range for spectroscopy (from 0.1 meV to 1 eV).

Using emergence in quantum phases of solid state materials, we can study analogies to the particles in our own universe (for example, through emergent electrodynamics in Quantum Spin Ice), or generate completely new types of particles with as-of-yet unknown applications.  We can begin to dream about these applications already, such as topologically protected quantum computation using anyons, or controlling magnetic monopoles in spin ice for “magnetricity”.

At the root of these exotic emergent excitations is a class of states called spin liquids.  These are quantum entangled states that defy the usual ordered phases of matter already known to us (in magnetism, for example, a ferromagnet, antiferromagnet, or other “ordered” state).  The spin liquid is disordered locally, but has a type of non-local (topological) order.   Spin liquids were first proposed as a potential mechanism for high temperature superconductivity, envisioned on a triangular lattice of isotropic spin 1/2 objects which could support a Resonating Valence Bond (RVB) state.  Variations on the RVB have been explored theoretically and experimentally over the past few decades.

We are now beginning to understand that anisotropy arising from strong spin orbit coupling (SOC) can produce much more exotic types of disordered quantum states.  The rare-earth titanate pyrochlores are a great example of how anisotropic exchange and single-ion anisotropy can lead to new phases of matter like quantum spin ice.  A major focus of the Ross Lab is to investigate other frustrated geometries based on rare-earth ions.

Thermal (classical) second order phase transitions are well-described  through the Landau-Wilson-Ginzburg paradigm, which uses the concept of an order parameter to formulate a theory of the system’s behavior near a critical point.   In quantum systems, tuning a parameter other than temperature, for example magnetic field, can produce a phase transition even at T=0  – this is called a Quantum Phase Transition (QPT).  The theory of QPTs is still under development, particularly how non-equilibrium quantum phenomena are generated after quenching through them.

To fully understand the basic interactions in new materials, we need high quality single crystals.  In the Ross Lab we produce single crystals using the optical floating zone technique.  In collaboration with the Neilson Lab in Chemistry at CSU, we also make use of flux, vapor transport, and hydrothermal methods for crystal growth. 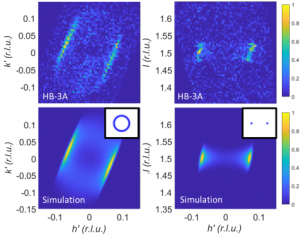 Recently published in Physical Review B: Magnetic frustration in Fe3PO4O3 produces an unusual magnetic state below Tn = 163K, where incommensurate antiferromagnetic order is restricted to nanosized needle-like domains. We report our single crystal neutron diffraction work, which show continuous rings of scattering in the ab-plane with a well-defined radius. Our analysis show Fe3PO4O3 does not choose a preferred ordering wavevector direction, despite having a fixed magnitude. We reproduce a quasi-degenerate manifold of ordering wavevectors using an antiferromagnetic Heisenberg model with nearest and second neighbor interactions. The state shows a stark similarity to the partially ordered phase of the skyrmion… 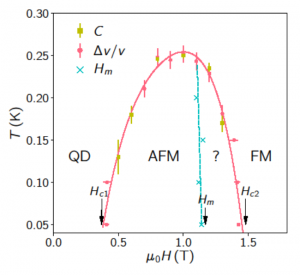 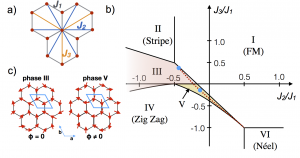 Recently published in Physical Review B: The magnetic honeycomb lattice with competing interactions can give rise to unconventional quantum phases.  We present observations of highly frustrated quasi two-dimensional (2D) magnetic correlations in the honeycomb lattice layers of the Seff = 1/2 compound BaCo2(PO4)2.  Specific heat lacks a sharp anomaly down to 2K although all spin entropy is recovered, indicating the absence of a transition to long range order in this material.  However, ac susceptibility shows that spins do not freeze into a spin-glass like state.    The spin correlations measured by neutron powder diffraction reveal short range quasi-2D order with…